Home » Articles » When Do Babies Start To Crawl?

When Do Babies Start To Crawl?

Your little one is growing so fast, and now it is time to crawl.

Are you ready to chase your child?

Crawling doesn’t happen overnight, even if it might seem to.

All the things your toddler has been doing before were leading to it. Slowly, but surely.

First, it was laying on the stomach lifting its head, straightening its neck. After that it was able to turn on the other side and look back, might even reached for a toy.

While a baby was laying on its back, lifting the legs to play with them, it was improving hands and legs coordination.

Later on, around the sixth month, most of the babies can sit, by themselves, with the help of their hands.  All this is making your child stronger, and now it can finally lift itself on little palms and knees and swing.

When your kid gets enough strength in his arms and legs, it will start to push back until it learns how to go forward. With a lot of practice and time, your little one will finally begin to crawl. Of course, first it will be slow and insecure, but practice makes perfect, and it will get faster.

So, get ready to chase your child.

When Does It Happen?

Most toddlers start to crawl around the ninth month of their lives. Have in mind that babies are not programmed and that each has its own pace. Crawling usually kicks in between seven and a half and ten months of age.

Is something different? Don’t panic!

It will happen, and you should be ready for it.

The majority will start to crawl as said above(between seven and a half and ten months). Some might do it later when they are about one year old. It’s possible that your baby is crawling, but you are not aware of that. It’s because some children develop their way of moving around.

They might do it on their palms and feet, use their butt or slide on their stomach.

“But my baby is not doing anything like that at all!”

This is fine too! Sometimes, some nurslings don’t crawl. That’s right, some kids never go on all fours, instead they start walking right away. This usually happens when they start to use walkers more often.

As long as they are using their arms and legs normally, either with standing upright, or it is walking on all fours, you should not worry.

What you should worry about is if you notice that one arm or leg is in use more than it should be.  This kind of asymmetry can indicate to a weaker nerve or muscular system. In this case, you should visit your pediatrician. 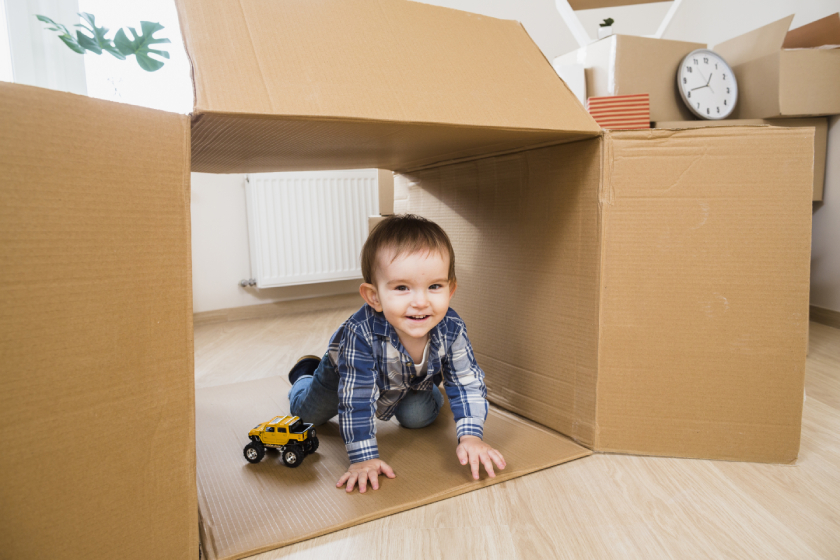 What Can You Do?

It is important that your little one has enough space to “practice” crawling. Surface for training is essential as well.

Different types of flooring can often be too slippery, and it makes it hard for practice.  Carpets with long fibers are hard to clean, which can make them perfect for dust and other allergens. Short fiber rugs or the wool ones would be the best.

The room should be safe and secured as well. Try to put all fine items away from reach, to avoid possible injuries or choking. The child will use the edge of the bed or a chair as a support, so have in mind the height when you put things out of reach.

As wells as lighters, matches, scissors, knives, razors, jewelry, batteries…  balloons and plastic bags can be dangerous, so put them away, they could cause chocking

This is a great time to start teaching your child to crawl and what it can or can’t do. Don’t just go around and say “No!”. Try to explain why it is not good. Things like “Don’t touch the fireplace it is hot.” Also, teach it not to put everything in its mouth. “Don’t things in your mouth if mommy and daddy did not tell you to.”

Get Ready; It Is Time for Exploring!

Crawling and moving around, under and over different things your little one gets to know its surroundings the best. When it sees a chair, it might try to go through it and most likely that’s what it will try to do.

Children, like everybody else, learn from each new situation and challenge. If they succeed, it will be an important new experience.  They will become aware of the space around them and the size of different things.

Your baby will know that the ball is in the living room if it sees it from the kitchen. Also, your toddler will be able to get to it.

In time crawling will be successfully mastered and the time for new adventures will come. Walking is upon you, so be ready. Remember to enjoy and have fun with your little one.

Cough and Cold During Pregnancy: Treatment and Prevention