Some parents concern themselves with their babies starting to crawl on time. However, there is no such thing as crawling at the correct time because every baby develops differently. Typically babies start crawling between 6 and 12 months, and some don’t even crawl but rather immediately turn to walking.

Crawling is a type of movement which children develop while spending time on the floor. Some kids figure it out on their own, while others need a bit of prompting. Some start moving backward before figuring out how to propel themselves forward.

There are several types of baby crawling including the crab crawl, classic crawling, bear crawling, belly crawling, and the bottom scoot. Some babies develop one of these styles, some all of them, and some none. There are cases where babies get around just by rolling.

Moving around will come naturally for most babies, and if it doesn’t, there are methods of helping them learn how to crawl. We have prepared a list of different crawling styles, so you’ll know what your child is opting for.

This is a usual type of crawling which is developed sooner rather than later in most cases. It entails lying flat on the belly and dragging it around on the floor. Another name for it is the commando crawl.

This style is typically developed on smooth surfaces as they make it much easier for babies to move around. They can use their arms and legs to lightly push or pull themselves across the floor in any direction. Nevertheless, some babies will develop the belly crawl on carpets, too.

If your baby is doing this type of movement or attempting it at least, make sure that your floors are clean at all times. Also, dress them in thicker clothes to keep them warm and safe. Some floors tend to be too cold or too rough for this type of motion.

The classic crawl, or the cross crawl, is the most common style and the one a lot of babies start with. It is characterized by babies distributing their weight equally to their hands and knees and moving both forward and backward. The baby will alternate between the right knee and left hand, and left knee and right hand in order to move around.

Remember that during this movement babies can become fast so you’ll need to keep an eye on them at all times. They have a tendency to bump their heads while accelerating because they are not yet in full control of their bodies.

This is a fun type of crawling which seems to entertain adults a great deal. Babies tend to opt for this style regardless of it being physically strenuous at times.

Usually, it entails lifting their bums in the air, keeping their elbows and knees unbent, and walking forward like a little spider. This is a funny sight, but it gets them to where they need to be. If your child is prone to crawling like this, make sure they don’t do it for extended periods as it can affect their posture and exhaust them. 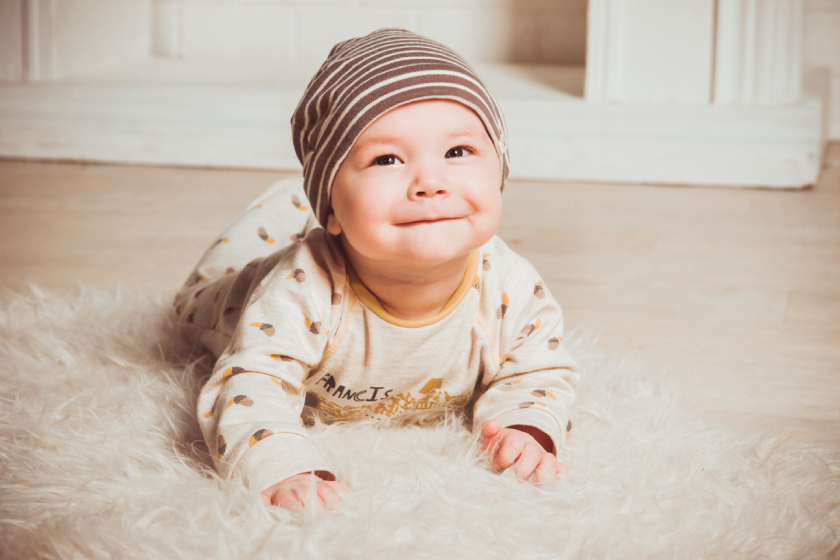 The crab crawl is a specific style of movement which differs among children. Usually, it is characterized by relying on one side of the body. So, the baby will use, for example, the right arm to pull itself forward, and the right foot to push itself frontward.

Some parents might be alarmed by this unequal distribution of weight and motion. Keep in mind, that this is a natural way to move around and it will not negatively affect your child’s development. Let it move sideways, or even backward, and figure it out on their own.

This is another funny movement which babies tend to enjoy. The bottom scoot is when babies sit on their bums and use their arms to pull themselves forward. The sliding motion can most easily be made on smooth floors, but some children cannot be stopped even with carpets.

Children who develop this style are active and sometimes won’t even bother developing a new method of crawling. This is perfectly fine. They will merely transition from scooting their bum around to walking at some point.

Some babies utilize their strength to the maximum by rolling around to get to where they need to be. There is nothing wrong with this type of motion especially because it tends to be the safest type of movement.

If your child tends to roll around support them by giving them applause. This will encourage them to pursue further physical activities and eventually get to walking.

Some children go straight to walking and skip the crawling part. This is normal and typical of some children. They will develop equally efficient motor skills regardless. If you want, you can practice motor development with your baby as additional exercises which they omitted by skipping crawling.

Continue encouraging time spent on their bellies for additional exercises. Put their favorite toys or colorful objects beyond their reach. You can practice arm and leg coordination by playing with a ball. You can prompt your child up on their knees while you play for core strength and balance.

You can construct a safe zone in your home which will be the baby’s playground. Surround the area with pillows and cushions and scatter their favorite toys all around. This way they will be encouraged to move around to reach every toy and therefore practice moving around.

Any type of movement your baby performs should be encouraged and celebrated. They should feel supported to develop their physical abilities further. Crawling and rolling are the best methods of moving around before actual walking ensues. Later, you can also use a walker to help your baby  starts walking.

It is vital to remember that there is no single accurate way of starting to crawl or move around. Anything your baby chooses to do will benefit their development and help develop their coordination, balance and overall motor skills.

The key is to make them use their physical abilities at the same time as their brains. By going to where they want to be and grabbing things they want to play with they will efficiently connect their thoughts with their movement.